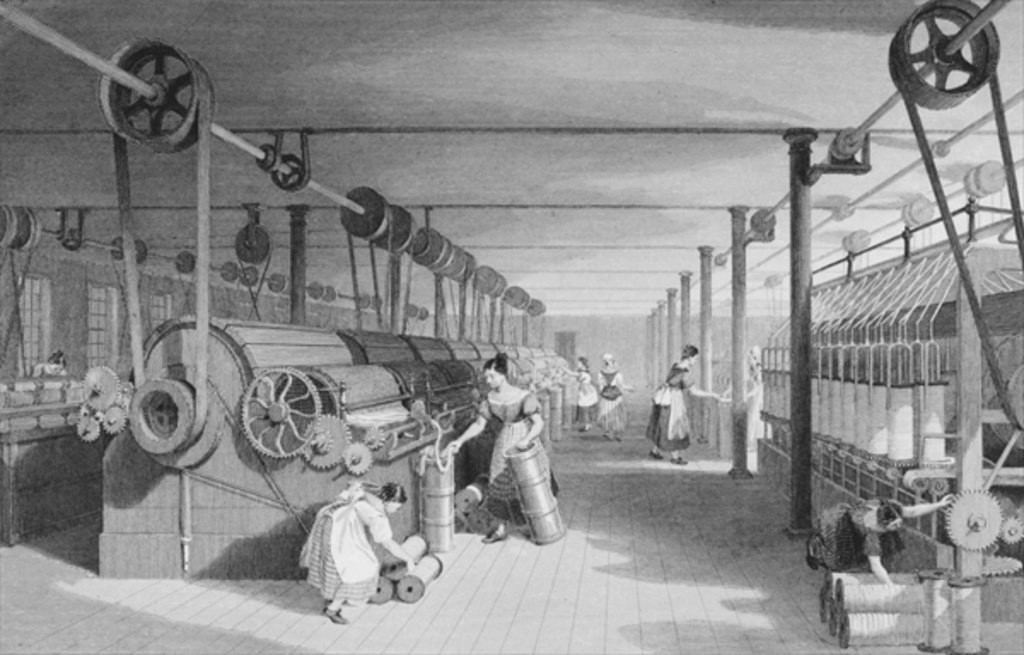 The term “Industrial Revolution” was first used in the 1820s by some French writers, which defined the enormous changes that, in a short time, turned Britain from a farming country into an industrial one.

English trade had begun to flourish during the reign of Elizabeth I and many chartered companies had been established.
In 1694 the Bank of England was founded by rich men who lent money to the Government and others. This financial system facilitated trade.
By 1707, after the union of England and Scotland, Britain possessed the largest internal market in Europe.
The colonies supplied raw materials and were obliged to buy British manufactured goods.

When George I came to the throne in 1714, there were small woolen industries and most of the work was carried on in cottages and the whole family contributed to the spinning and weaving of wool.

After a few decades there was a great increase in population  and consequently in the demand for more pots, more beer and more clothes. A quicker and more efficient production was needed to satisfy the demand.

At first, most of the power used to drive machinery came from water, so the first mills, buildings were manufacture was carried on, were built by the side of the rivers.

In 1775 James Watt invented the steam engine, that used steam power and was useful in many industries, not only in textiles.

New factories were built on the coal and iron fields of Lancashire, Yorkshire, Central Scotland and South Wales. They transformed the cottage industry into a factory industry.

In the Midlands, using locally found clay, factories produced fine quality china goods. The most famous factory was started up by Josiah Wedgewood.

But the goods had to arrive from factories to the ports and the conditions of the roads were really bad.

Anyway the transport was improved: navigable rivers and new waterways built made transport of goods cheaper than by land.

Adam Smith “The Wealth of Nations”

The first three decades of the 19th century were a period of social conflict and political repression.
The revolution in ideas brought about by the American and French revolutions provided a constant threat to the social structure. The government took repressive measures such as the prohibition of public meetings of workers. Since they have no vote and were prevented by the law from organizing labour unions, their only means of protest were petitions, agitation, hunger riots.

Parliament followed the economic principles of Adam Smith (1723-1790). Smith advocated the ending of all government regulation of internal and external trade. This doctrine of letting such matters alone – Laissez-faire – was very convenient for the ruling classes since it freed them from all responsibilities, including the conditions of labour and wages.
Adam Smith was professor of logic and moral philosophy at Glasgow University. He resigned and visited France, where he met Voltaire. He was influenced by many great thinkers such as David Hume and John Locke.

The Wealth of Nations

After returning to Britain he wrote The Wealth of Nations (1776), his major work, which is considered to be the most influential book on political economy.
It is divided into 5 sections, or books, as Smith called them:
BOOK ONE: The Division of Labour, Value and Distribution
BOOK TWO: Capital, Saving and Investment – Of the Nature, Accumulation and Employment of Stock
BOOK THREE: Of the Different Progress of Opulence in Different Nations
BOOK FOUR: Of Systems of Political Economy
BOOK FIVE: Of the Revenue of the Sovereign or Commonwealth

The opening sentence of the whole work is “The annual labour of every nation is the fund which originally supplies it with all the necessaries and conveniences of life”. It is therefore immediately clear that the real productivity of labour is one of the leading themes of the work. Increasing the productivity of labour required its specialisation, or division, that, according to Smith, was the key to economic progress. Smith set out the distinction between “natural” and “market” prices:
➢ natural price is the long-run competitive equilibrium price, determined by cost of production, and consists of wages, rent and profit at their natural levels;
➢ market price is the short-run price, determined by supply and demand.
Smith distinguished profit as a separate income that is a compensation for risk and put forward the theory of saving and investment. He felt that money in itself had no value unless it was used to improve and strengthen the company.

The economist felt that the “capital of every growing society is first directed to agriculture, then to manufacture and lastly to foreign commerce”, saying that any other order was unnatural. He was a strong supporter of free trade, both at home and abroad and he also favoured a free choice of occupation. He advocated the free play of self-interest, because the entrepreneur was essentially out to improve his own condition. Smith felt that this was not a negative idea because by pursuing his own interests, the entrepreneur frequently promoted the interests of society.

Adam Smith confined the role of the state to three areas: defence, justice and civil government. State interference must end there. He said: “Every man, as long as he does not violate the laws of justice, is left perfectly free to pursue his own interest his own way, and to bring both his industry and capital into competition with those of any other man, or order of men. The sovereign (state) is completely discharged from the duty of superintending the industry of private people…”.